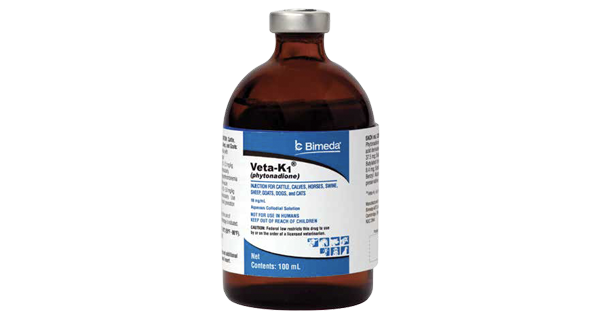 VETA-K1® Injection is a yellow, sterile, aqueous colloidal solution of Vitamin K1, with a pH of 5.0 to 7.0, available for injection by intravenous, intramuscular, and subcutaneous routes.

Caution: Federal law restricts this drug to use by or on the order of a licensed veterinarian.

Veta-K1® Injection is indicated in coagulation disorders which are due to faulty formation of factors II, VII, IX and X when caused by vitamin K deficiency or interference with vitamin K activity.

Veta-K1® Injection is also indicated to counter hypoprothrombinemia caused by consumption of bishydroxycoumarin found in spoiled and moldy sweet clover.